Periodontal disease affects your gums, presenting itself in many ways depending on the level of severity. Generally, periodontal disease occurs when plaque builds up on your teeth, eventually developing into tartar. This causes the inner-layer of gum and bone to pull away from the tooth, creating a pocket. This pocket then fills with the debris of the things you eat and drink, eventually becoming infected. As your enzymes try to fight off the infection, toxins are produced that will break down the bone and tissue that hold your teeth in place. Because this disease is often painless, many people who suffer from it don’t realize it until it’s too late. In the early stages, known as gingivitis, periodontal disease is still fixable with a professional tooth cleaning coupled with diligent at-home dental care, including brushing twice a day and flossing daily. It is important that you know what to look out for so that you can catch the signs before it’s too late. Contact us immediately if you experience:

If you believe you or somebody you love may have signs of any of the periodontal diseases listed above, set up an appointment with us today. 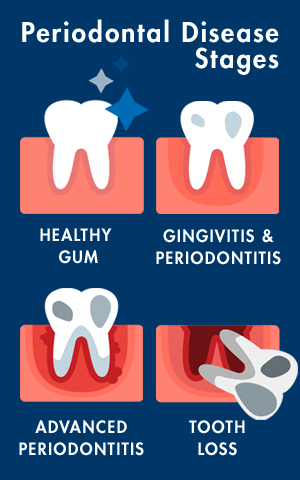